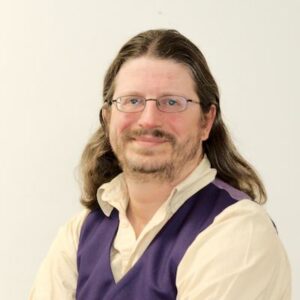 Dave spends his up time down at the physical racking-kit-and-plugging-things-in end of the spectrum, building bits of Internet for a national ISP, from his base in the Midlands. He started life as a signalling engineer on a preserved railway in North Wales, where he gained his love of technology and telecoms, especially the physical infrastructure aspect.
The transition to Internet Engineering was an obvious and rewarding one.

Dave's downtime is spent crewing Larp festivals and generally being a massive geek, a badge he accepts with pride.

Dave credits the wider ISP community with both nurturing his passion for technology, and the skills he uses in his career, and sees participating in the UKNOF PC as a way to give back to the community that has given him so much, and mentor the next generation as others once did for him.